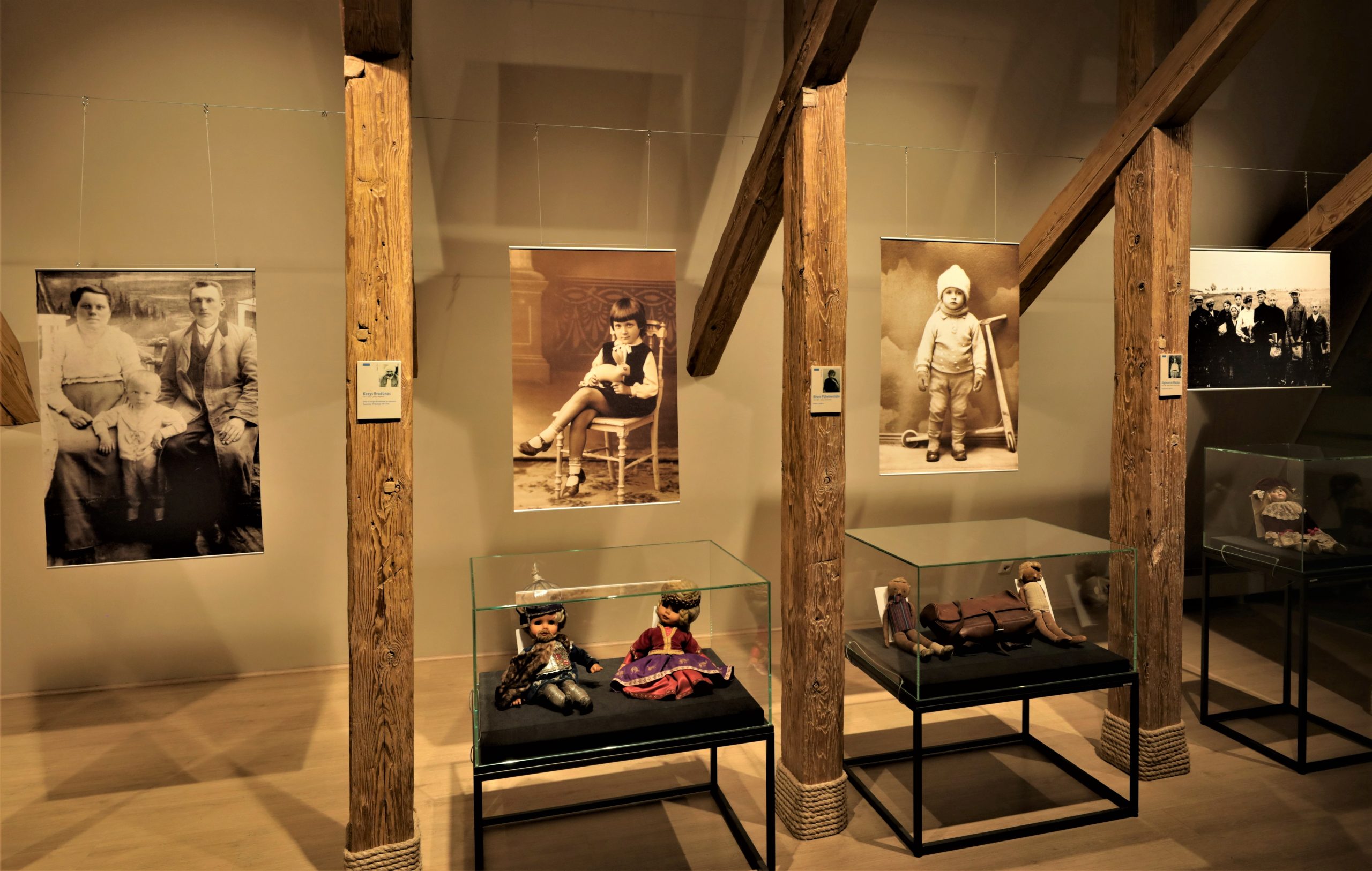 There is a lot of material in the archives of the Maironis Lithuanian Literature Museum. As we organize and research it, we are constantly making joyful discoveries that we want to share. The childhood marks of émigré writers - photographs and objects - deserve special attention. What could be more beautiful than a child's carefree smile and eyes full of wonder, looking out at the world...

Let's pierce the veil of history and take a look at the childhood of future writers, translators, literary critics and scientists.

In the first photo we see a small baby - Henrikas Nagys (1920-1996) - a future poet, literary critic, translator, doctor of humanities, recorded in Mažeikiai in 1921.

In another photo we see Vytautas Aleksandras (1918-2004), the son of professor, historian Ignas Jonynas. The future literary critic and librarian is immortalised with a ball in his hands in Kaunas in 1922. He grew up and matured in an aristocratic environment, and later experienced many hardships in life, but achieved his dream goal of working as an academic and managing a library in Montreal.

A girl with an open smile, looking out at the world. This is the future poet and translator Zinaida Vera Nagytė (1927-2013), whose photograph was taken in Kaunas in 1931. She had to endure a lot of hardships and troubles, but she stood up stoically. At the end of her life, she looked at everything with eyes full of gratitude, and her poems are full of hope and faith.

If anyone thinks that scooters are an invention of the 21st century, look at the photograph of Algimantas Mackus (1932-1964), the future writer, literary critic and editor. The photograph is redolent of maternal care and concern - a child, dressed in the finest possible attire, wearing warm felt and calico, standing by a modern scooter.

In 1924, in Kybartai, we see Algirdas, the first-born, surprised in his pram, looking at his cousin Kynastas, who is strutting on a wooden horse nearby. The photo shows the future writer, playwright, Radio Free Europe contributor, chairman and vice-chairman of the Lithuanian section of the PEN Club Algirdas Landsbergis (1924-2004).

In the other photo, a small son Kaziukas (1917-2011) is standing in the care of his parents Ona and Jurgis Bradūnas. The photo was taken in Virbalis in 1919.

The future poet, artist, teacher Aldona Veščiūnaitė (1923-2012) sits in an elegant car in Alytus around 1927, together with her brothers Edvardas and Albertas, adorned with ribbon.

A playful photograph taken in Kaunas in 1928 shows the future writer, director and actress Birutė Pūkelevičiūtė (1923-2007) with a bunny on her lap. We see a portrait of a small but stubborn, persistent, ambitious future artist. With her head slightly tilted, her leg crossed, she looks intently at the world.

Unfortunately, some of the writers' childhood photographs did not survive or were not available at all, but we are sharing a photograph of village children attending the Utena Farmers' Circle. Alfonsas Čipkus (1919-2015; third from the right), the future poet, translator and literary critic, stands out as he holds a white chequered hat.

In the showcases, there are memorials to the writers: dolls made by Birutė Pūkelevičiūtė, for whom she sewed her own clothes. A beautiful doll treasured by the poet Alfonsas Nyka-Niliūnas was a gift from her daughter Berenika, brought back from Italy. The special dolls belonging to the poet Maria Stankus-Saulaitė and the backpack remind us of the poor life in the DP (Displaced Persons) camps in Germany.