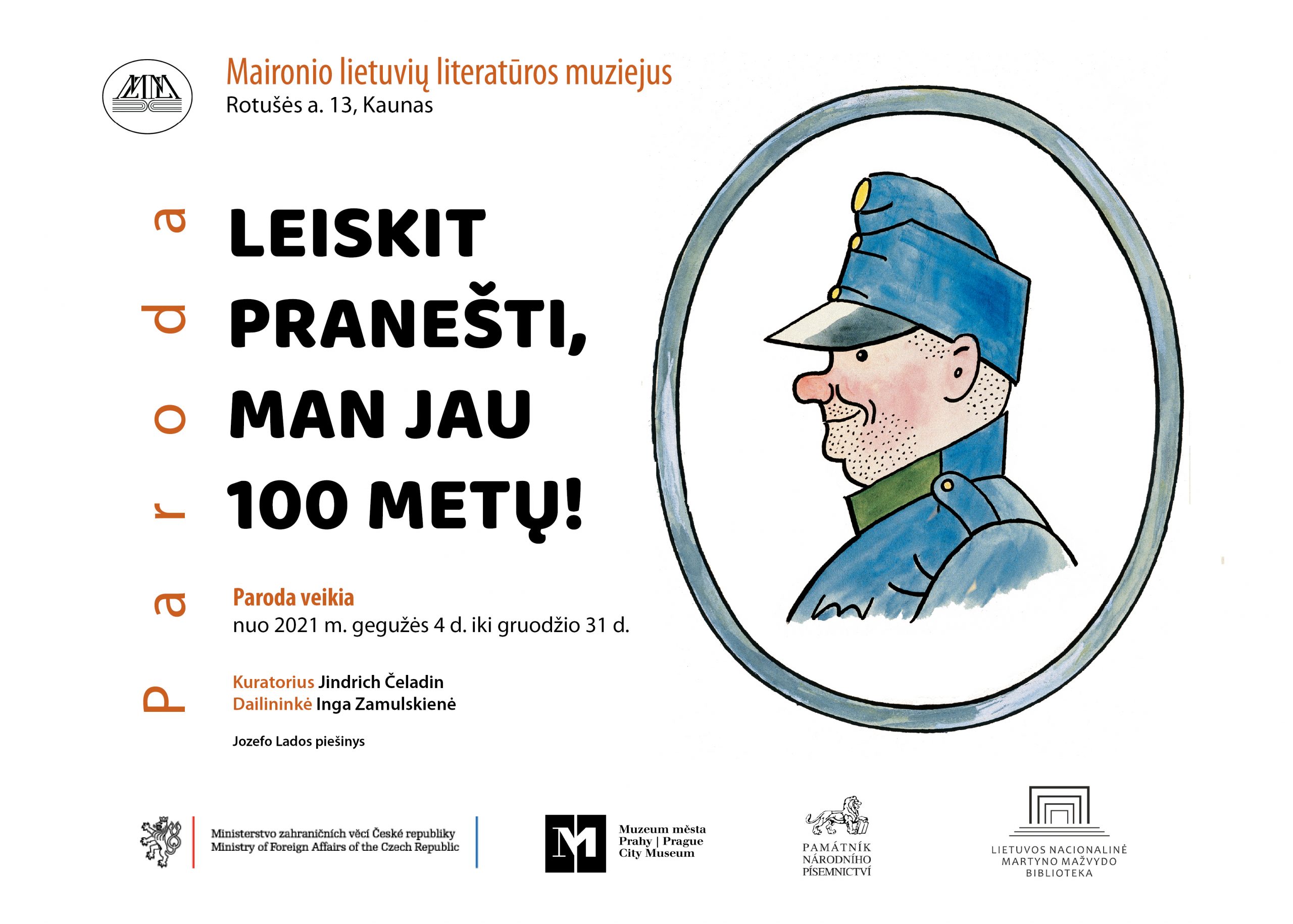 Maironis Museum of Lithuanian Literature, in cooperation with the Czech Embassy in Lithuania and the Prague City Museum, in 2021 commemorates the anniversary of the novel “The Fateful Adventures of the Good Soldier Švejk” by the Czech writer Jaroslav Hašek. It has been 100 years since the first edition of the work.

The character of Švejk was created before the First World War. In 1911, Hašek set up a satiristic political party, “The Party of Moderate Progress Within the Bounds of the Law”. Its members came up with the idea to create a cabaret play at the Vinohrady Brewery. The first play, written by J. Hašek, was called “Fortress”, and it featured some hard-working but foolish servant of Emperor Charles IV, Josef Švejk, trying to take over the fortress of Monfalcone. He obeyed every command, even the stupidest. The play “Pie” was shown three times in the restaurant “U Zvěřinů”. Later, the play “Mona Lisa” appeared, which emphasizes the disappearance of a famous painting. In May 22, 1911, in the satirical magazine “Cartoons”, the short stories “The Holy One Stands Against Italy” were published. In 1912, J. Hašek published a military short story “The Good Soldier Švejk and Other Strange Stories”. The most significant work of the writer about Švejk, created before the novel, is a series of short stories “The Commander of the City of Bugulma”, which has been published in the magazine “Tribuna” since January, 1921, to March, 1921.

In 1921, at the “U Pánků” pub in Žižkov, J. Hašek stated: “I will release Švejk myself and will not give it to anyone.” Together with the anarchist František Sauer, they received a loan from the photographer Václav Čermák, to whom he asserted that a lot of money could be made from literature. In March, 1921, the first volume of the pamphlet, “The Fateful Adventures of the Good Soldier Švejk in a World War”, was published at Neubert's printing house in Prague, and contains thirty-two pages of a humorous novel about a “stupid” soldier. After a while, V. Čermák began to question the project, so J. Hašek and F. Sauer alone published brochures on “The Fateful Adventures of the Good Soldier Švejk During the World War”. They met the artist Josef Lada, who drew the design of the cover, aptly capturing a portrait of an Austrian soldier who “light a pipe without fear, pouring bullets and grenades into the rain.” Some book publishers have refused to sell “Švejk”. Emil Weinfurter said: “We don't work with such vulgar literature to educate a nation of sick and dishonest people, we don't want to pollute the name of our company.” But the half-year-long amateur novel publishing soon ends and is taken over by a famous publishing house. However, the writer himself will experience the success of the novel only in the last years of his life, although the book is well sold, performances are being made, and a film is planned. In 1921, a separate volume, “Behind the Lines”, was published at the end of June, followed by three more volumes: “At the Front”, “The Glorious Licking”, and “The Glorious Licking Continues”. J. Hašek's hero did not manage to leave for the Russian front, as the author died of a heart attack when he was only 39 years old.

Jaroslav Hašek's novel has been translated into 58 languages. The incomplete work appeared in Lithuanian in 1932, the whole text was published in 1956. Novel was translated in 2000 once again by poet and translator Almis Grybauskas, who was awarded the prize for the best translation of the year.